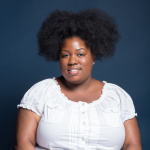 “Africa is obviously a huge place with 54 countries. It’s very complex with a lot of amazing things coming out… and we somehow have a nuanced look at the continent,” she said.

Nonetheless, promoting both the new and old culture is appealing to tourists, and they all agree that the continent is moving forward in a rapid way through technology that isn’t just social media-based.

“In a mobile space you have an entire continent that has more mobile users than the entire America and Europe combined,” Oppong added.

Skipping over old technology that western countries had decades ago and moving straight into what’s new has become an asset to the continent — and now it’s actually necessary. According to Batravil, Africans have found a way to explore everything from finding information and doing banking transactions on their phones. Digital platforms on mobile devices are becoming the basis for growth in the continent in rural villages and cities.

“You’re not bringing old things here, Africa has the potential where you can bring in something new because it doesn’t exist,” he said.

As the panelists continue their technology-surrounding work on the continent, they’re promoting Africa on a larger scale that surpasses word-of-mouth. Jumping on the bandwagon — at whatever stop it’s at in Africa — doesn’t only apply to understanding technology and social media.

Creating something new on the continent can also parallel to businesses that will benefit those in and outside of Africa. Traveling to Africa was the first stage of every panelist’s business pursuits, they said.

Osekre, Ghanian founder of Afropolitans, was the only exception. More than a few of the event panelists were able to name other friends and associates who have moved to Africa and now own successful businesses. Becoming involved with African tourism was a preliminary step to doing so.

One of Oppong’s acquaintances was a prime example, “He now owns a radio station down in Ghana, it’s the number one radio station in Kumasi.”

If there was one important takeaway from this Social Media Week event, it’s that tourism in Africa isn’t just one dimensional. It encompasses many different experiences and outcomes because of its diversity in cultures, its growing tech industry — and the opportunities to find new business ventures as a result of gaining a firm grasp on what African tourism really about.