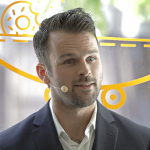 AFKInsider: Please explain which companies you work with and how you got them on board.

Monadjem: We have two main targets: one is the existing pre-paid distributors, and they’re trading scratch cards; the second is the mobile networks themselves. We prefer to focus on the pre-paid distributors. They tend to have well-honed operations of the informal trade.

AFKInsider: Could you speak about the market for this device?

Monadjem: We have three layers, which are the local merchants, the in-country partner and the consumer. The wide base is the consumer that purchases the airtime. And we’re talking about the un-banked consumer — this is a consumer very based on cash and unlikely to have a bank account. If they have an account, it’s likely to be for money transfers. The primary user (of the terminal) is a merchant. These guys could have a shop in Nairobi or Lagos, or they could be street hawkers — they could exclusively be selling [anything] from mobile services to hard-boiled eggs. The third stakeholder is the in-country partner. We’re a platform for them. That terminal we’re talking about, it’s not our terminal, it’s our in-country partner’s terminal.

AFKInsider: Could you give us an example of one of your in-country partners?

Monadjem: Well, across the continent, $60 billion in airtime a year is already being traded by someone. One example is Bamba Kenya, our partners in Kenya. They are now using our system to distribute prepaid mobile airtime instead of using scratch cards. They acquire the prepaid pins that are loaded into the system and administer a cash-collection, whether that be banks, mobile money or an agent network. They’re the ones that define a product that is suitable for their country.

AFKInsider: What is the typical amount of money that a local merchant can make with the device?

Monadjem: Let’s see, at 5 percent… about 500 ZAR a month, which is about $50 a month. Something to bear in mind is that there are two reasons for an informal trader to sell prepaid mobile. The first is, of course, that it earns a profit. The second is a drawcard that attracts footfall to the point of sales and enables a merchant to increase sales of other, usually higher margin goods too. In Nairobi I heard from some informal retailers that their overall sales dropped 40 percent when they had stopped trading airtime. I think it’s important to understand that $50 sounds like very little, but the median income for an entrepreneur in the informal trade in South Africa is about $160 per month overall, so it’s a sizeable jump on a very low base.

AFKInsider: What is your fund-raising status?

Monadjem: We’re actually pretty well funded now. There were three rounds to our fundraising. The first was the normal, you know, friends-family-and-fools type fundraising. The first investor after me was my mother, then my best friend, and people I knew from McKinsey. We did qualify for a government grant in South Africa, and it was very helpful for the startup. The second round was venture capital, and in that Esther Dyson was instrumental. She is a very recognized angel investor within the U.S. and Russia. She hadn’t done deals in Africa, and she said, ‘You have to find another investor and I will co-invest with them.’

But in SA, there isn’t that much capital for start-ups that want to do more than build an app. If you want to build an app, you can do it pretty easily, or if you want to buy a mine you need to raise 20 million dollars. But between there we didn’t find that appetite. We went to Amsterdam, London, New York and San Francisco. In Amsterdam we found eVentures Africa, which fit us perfectly, as they’re Africa focused, tech focused and media focused. All of the partners were former entrepreneurs, they understood the journey, they knew they could understand the pitfalls, they were great thought partners. The third round was a private family fund out of London. So we’re done for fundraising.

AFKInsider: What other markets do you see Nomanini spreading into?

Monadjem: We’re currently active in South Africa and Kenya. We’re starting a deployment in Zambia and we’re very close to starting deployments in Congo and DRC (Democratic Republic of Congo). We’re also looking to Jordan and Brazil, where there are different forms to purchase airtime. Scratch cards are a big form of purchasing airtime in Brazil, and in Jordan it’s printed vouchers in grocery stores. It’s quite exciting, because it’s a story of African-developed technology.