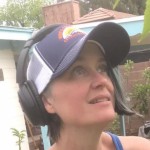 Stephanie Lampkin’s goal in life is to create technology where the identities assigned to you at birth have minimal bearing on the direction of your life. Who better to lead the charge in merit-based matching than a 4’11” gay black girl who knows how to code?

Lampkin learned to code when she was 13, and by the time she was 15, she was a full-stack web developer.

She has an engineering degree from Stanford University, an MBA from Massachusetts Institute of Technology, and the bizarre experience of being turned down for a software engineering position in Silicon Valley—because her background wasn’t “technical enough.”

In other words, when it comes to diversity in tech, Lampkin has seen some of the problems in action.

That’s how she came to create Blendoor, the recruiting world’s answer to single-blind testing turned on its head.

Blendoor is an app that job seekers and recruiters can use to look for good matches. Job seekers can use Blendoor’s talent marketplace to see how diverse a recruiting company is, but recruiters can only see the specs of the job seeker—education, experience, skills, for example—not their name, gender, race, or any other identifier.

An app like Blendoor is only part of the solution to tech’s diversity problem, Lampkin told Moguldom.com. Other issues that need to be solved include the fact that tech companies are still recruiting from a tiny group of Ivy League schools.

Stephanie Lampkin: Both are needed! I always think about how analogous this time in tech is to sports in the early 1900s. Baseball and basketball were once reserved only for white men; it took the efforts of both the baseball and Black communities to elucidate the value of integration. Now Black and Latino men benefit from stereotypes in that domain. Coaches from top and wealthy universities travel to ‘the hood’ to find up-and-coming Black talent. Can you imagine what that would look like in tech? Mark Zuckerberg or Marc Benioff showing up to a hackathon in Mobile, Alabama, to source top Black tech talent. I always say bias isn’t eliminated, it’s recreated.

Moguldom: You have distinguished between a sort of surface-level lip service about diversity compared to what you called a C-suite buy-in and prioritization. Which tech biggies are making the buy-in right now, if any?

Stephanie Lampkin: From where we sit, it’s often the legacy companies like Intel, HP, Microsoft, Xerox, and Intuit, with a few exceptions. The smaller, newer tech companies chalk the diversity issue up to smaller budget equals smaller outreach, but I think it has more to do with the different generation of leaders. The leaders of legacy tech companies emerged during a time when affirmative action wasn’t a dirty word, and one third of computer science degrees were awarded to women. The leaders of tech companies born during the dot.com boom and beyond are part of a culture that emerged when computers, gaming and tech were marketed towards boys —  things they worked with outside of the classroom. This sort of revenge-of-the-nerds/brogrammer culture has led to the ‘leaky pipeline’ and the growth of ‘hire-people-you-know’ cultures.

Moguldom: Do you think the tech biggies like Facebook, Apple and Google are using programs like Black Girls Code to try and change their numbers, or just as a sort of social reputation Band-Aid?

Stephanie Lampkin: I don’t think organizations like Black Girls Code are regarded as a valuable sourcing partner. They’re seen as charity/philanthropy/social impact that may yield results in 10 years. There needs to be evidence of return on investment if diversity efforts are ever to be taken seriously by CXOs (chief experience officer). We’re working on capturing that sort of data in Blendoor’s inclusive people-analytics technology.

Moguldom: Blendoor is ranking companies based on diversity data — what you call the BlendScore. Many companies want to be seen as progressive, but that data reveals that’s not the case. What has the public response been like?

Stephanie Lampkin: Surprisingly positive. Out of 161 companies, only one has requested to be removed. The most common feedback is just a request to update inaccuracies, but appreciation for what we’re doing and how much it’s needed.

Moguldom: You modeled the BlendScore in part on the LEED scoring system (Leadership in Energy and Environmental Design, used to evaluate the environmental performance of a building) which has really caught on. Do you think scoring for diversity could achieve a similar status?

Stephanie Lampkin: That’s the goal. I want BlendScore to catch the eye of investors and board members, job seekers and even consumers.

Moguldom: How much of a problem do you think it is that so much of the venture capital community is white?

Stephanie Lampkin: I always think about things in a larger historical context. Venture capitalists have been white men for a very long time. VCs financed expeditions to find the New World, and to acquire slaves and natural resources. It’s an institution, like many others, that was never meant to be inclusive, so I don’t necessarily see the lack of diversity in the VC community as the root of the problem. It’s more of a byproduct of a much larger problem: some people are literally born with bad credit.

Moguldom: Have you seen any innovative strategies for promoting diversity from any tech companies?

Stephanie Lampkin: I like the things that Google has experimented with by having Googlers teach CS101 (Introduction To Computer Science) at certain historically Black colleges and universities, and now even forming a Howard West campus. I also think AirBnB’s apprenticeship program is pretty awesome. It basically says, ‘Come with passion and grit and we’ll teach you how we code.’ It reminds me of what Ford and GM did to get so many African Americans to migrate from the south for employment in the North and Midwest. We’re still relatively early in investigating different cool things companies are doing, but I’m excited to see what Silicon Valley, who prides itself on innovation and meritocracy, does to solve its equity, diversity and inclusion problems.

Stephanie Lampkin: As super intelligent and as liberal and as progressive as we may think we are, human beings need to embrace the fact that schemas and unconscious bias drive our decision-making whether we like it or not. When I walk into a room to pitch a VC, even if it is a black gay woman, there is no data in their brain to pull from to fairly and accurately gauge my competency as a founder—because there has never been a black woman engineer to create software with international exposure worth billions of dollars.

Never. I don’t fit the type.

Even though research has shown that the most common characteristics of successful startups are at least one female founder, one technical founder, and one founder with a Stanford or MIT degree—and I embody all three—I’m still not venture-backable.

My overarching goal in life is to create technology where the identities assigned to you at birth have minimal bearing on the direction of your life. It’s ambitious and contrary to our natural human instincts, but I think technology can do this, and it will be a much more fruitful reality than AR or VR. And who better motivated to lead the charge than a 4-foot, 11-inch gay black girl that knows how to code?